A Bit of Seasonal Beauty 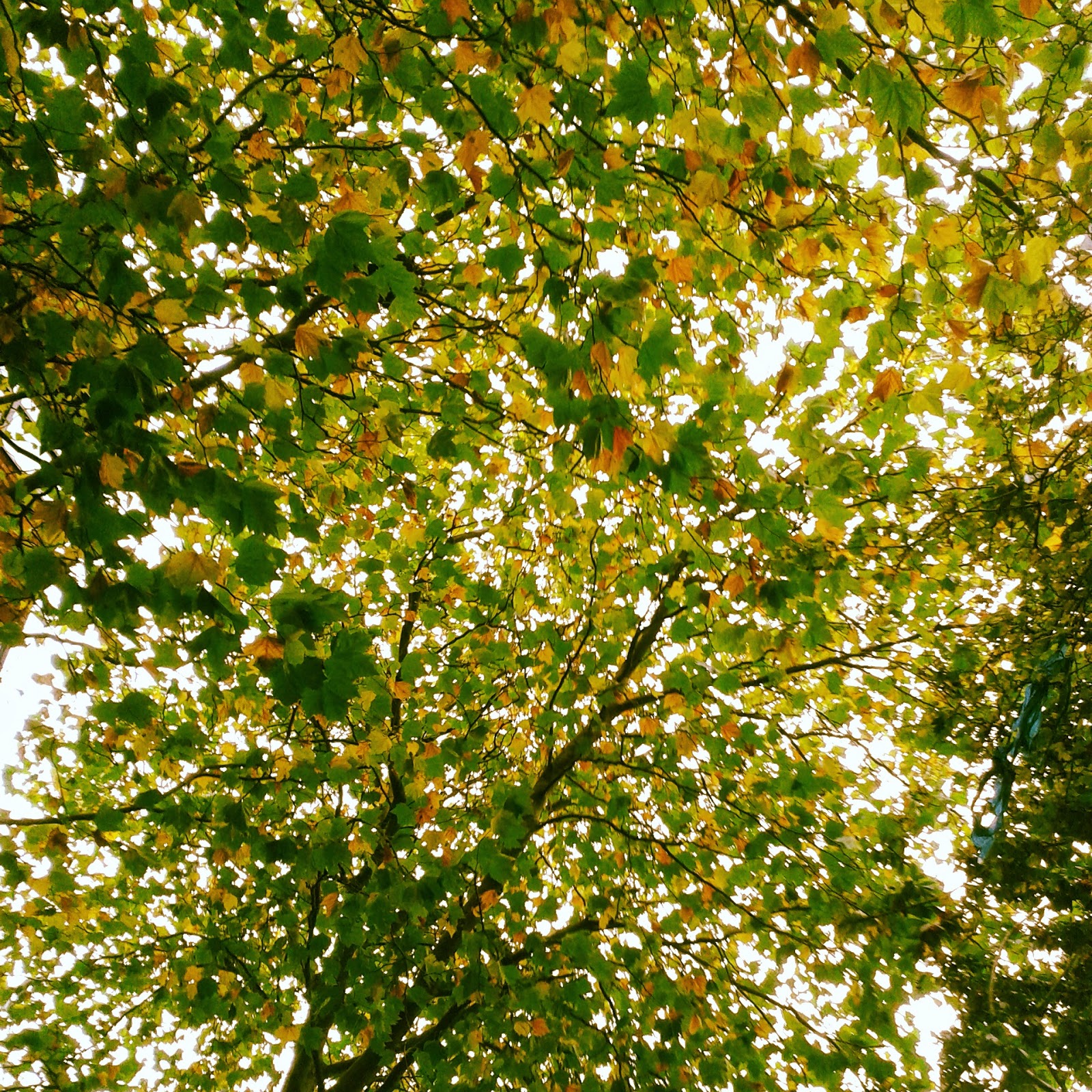 Just dropping by to share some seasonal beauty that I saw the other day...

Fall or autumn...whichever you say or prefer, is my favorite season! There's so much vivid color. I just love it!

Have a wonderful day wherever you are!

Posted by Unknown at 2:42 pm No comments: 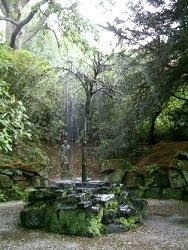 It's Monday, the weekend has passed by in a flash, as usual, and another week stretches out in front of us all.  Perhaps it's time for a little Sanctuary then?

'Sanctuary' can mean different things to different people and can be found in lots of ways, but right now, with autumn really setting in and Christmas on the horizon, it makes me think of being on holiday.  We had a wonderful time in Scotland this summer and, despite the changeable and cooler weather, we did have some lovely sunny days.  There is something magical about the scenery in Scotland.  It's incredible, and seems to change each time you go around the next corner, if you know what I mean.  Here are a couple of shots from some of our 'scouting for film location' days.

Glencoe is simply breath-taking, and the photos I have don't do it justice.  I think we must have been unlucky with the weather there, as we hit rain each time we drove through the pass.  As you can see, we had great weather when we visited Kilchurn Castle.  The colours in this shot looking towards the mountains from the opposite shore are really vibrant.  We picked out this little bit of shore as a nice, quiet location for filming while we were looking around the castle, which was heaving with tourists.  So, we drove around the top of the loch, parked up on the side of the road and tramped through long grass and then very wet bog to this wonderful site.  It did feel a bit like something out of Swallows and Amazons, and you could see where people had previously camped and partied!  After much repositioning of a sinking camera and tripod (not to mention the cameraman!) we got some nice footage, and here's another shot from the shore across the loch to the castle.

Happy days!  Why not let us know where you escaped to this summer via the comments section, or how you find those precious moments of sanctuary?  I hope you enjoy the rest of your Monday.
Posted by Unknown at 1:51 pm No comments:


Hello readers, and welcome back to the Labyrinth after our summer break.  Dori and I have had an interesting couple of months with lots of things going on, and never enough time to do everything, as usual...  Dori has been working on writing her first novel, and I've been busy decorating the house, sewing costumes, knitting scarves and cowls and being wardrobe mistress and general dogsbody for my daughter's film shoot in Scotland.  It's been fun!  More about those things in forthcoming posts, though...

Today, here in England, it is officially the first day of autumn, marked by the autumn equinox ('equal night'), which means the period at which day and night are of equal length.  This definition is, however, not quite so clear cut, as you can read in this article published yesterday (22nd September 2014) by Hannah Osborne in the International Business Times.

Where I live, in the far west of England, autumn has crept in over the last couple of weeks.  The nights and mornings have become much colder, the leaves are starting to lose their summer green and the beautiful burnished colours that the forest rewards us with at this time of year are starting to show.

So, the 'Season of mists and mellow fruitfulness' that Keats so beautifully portrays in his 'Ode to Autumn' is definitely here, despite what the weather forecasters may say about warm weather continuing into October.  Autumn just has a certain feel about it, don't you think?  That touch of chill dampness in the air and the smell of woodsmoke from woodburners or the occasional bonfire...  Everything looks brighter and richer, berries are starting to weigh down the branches of trees, and soon, as the nights draw in and the temperature drops, what can be better than to curl up with a good book in a comfy armchair in front of the fire?  Not forgetting a steaming cup of hot chocolate either!  This is definitely my favourite time of year...

If you'd like to read Keats's poem, you can view it here at allpoetry.com.  You can also listen to the talented Ben Wishaw reading the poem via the YouTube video below.


Has autumn started where you are?  We'd love to hear from you, and you can write us in the comments section below.
Posted by Unknown at 6:05 pm No comments: 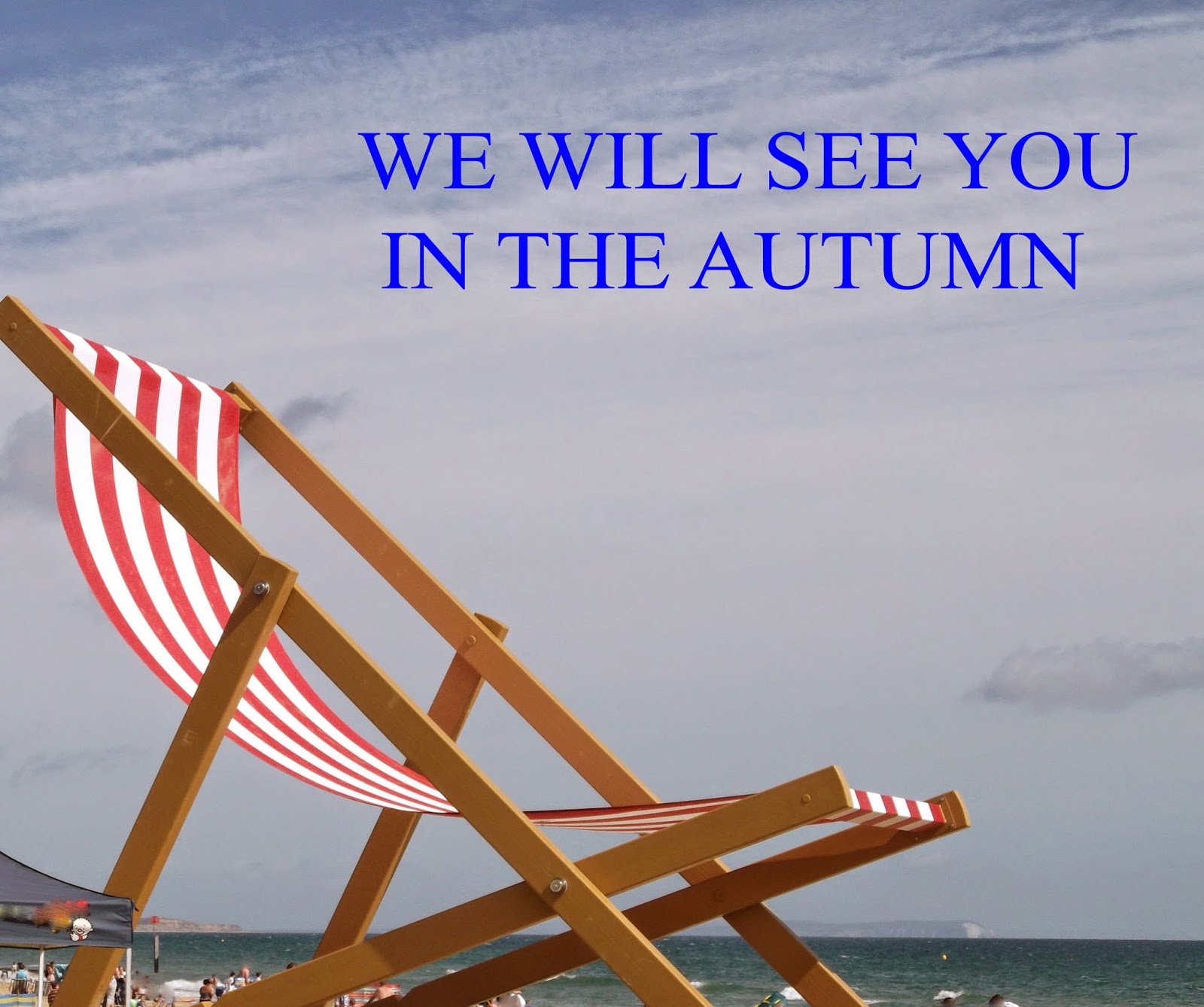 We have decided to take a summer break here at Labyrinthus XXI. Sometimes it's good to take a breather and go out and explore. That's one of the great things about summer...it's a chance to get out and just enjoy!

Have a great summer and we'll see you in the autumn!

Posted by Unknown at 7:30 am No comments:

The Creative Maze: Costume-making for Film. 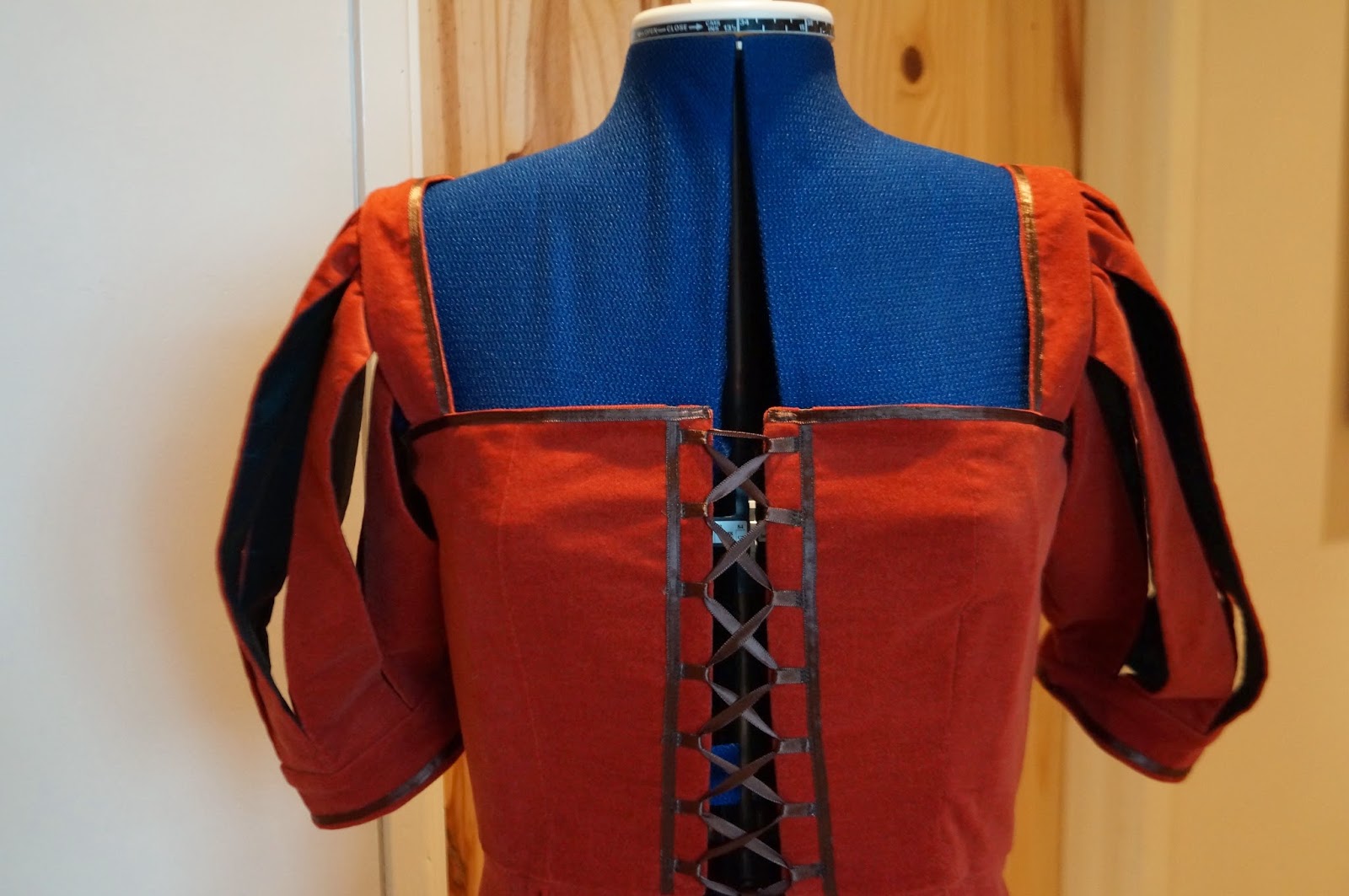 Hello again, and welcome back to The Creative Maze.

You may remember, from my last Creative Maze post, I promised you a decent image of my finished huntress costume for filming later this year?  Well, here are a few shots... 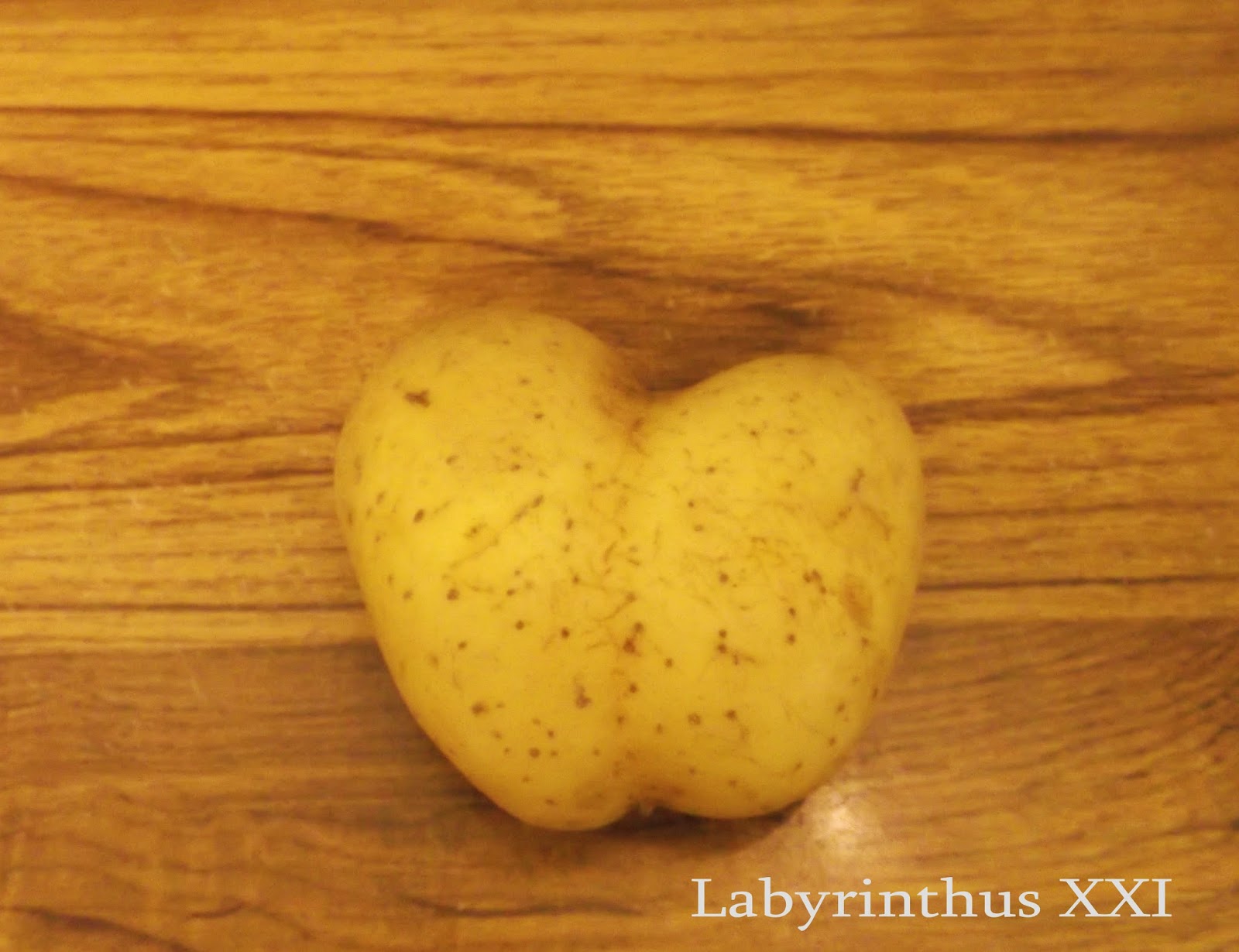 I found this cute little potato nestled in amongst the other 'normal' potatoes last year and since I love documenting things I just had to snap a picture of it. I mean, how many times do you go to make something to eat and you find heart-shaped food? It made my day and looking at it now nearly a year later it still makes me smile!

Have you ever come across any heart-shaped food or unusually shaped foods? Have you seen a face staring back at you when you're about to dig in? LOL. If you have, we'd love to hear your story. Please leave us a comment and tell us about it.

Enjoying the view, because sometimes, pets need sanctuary too... 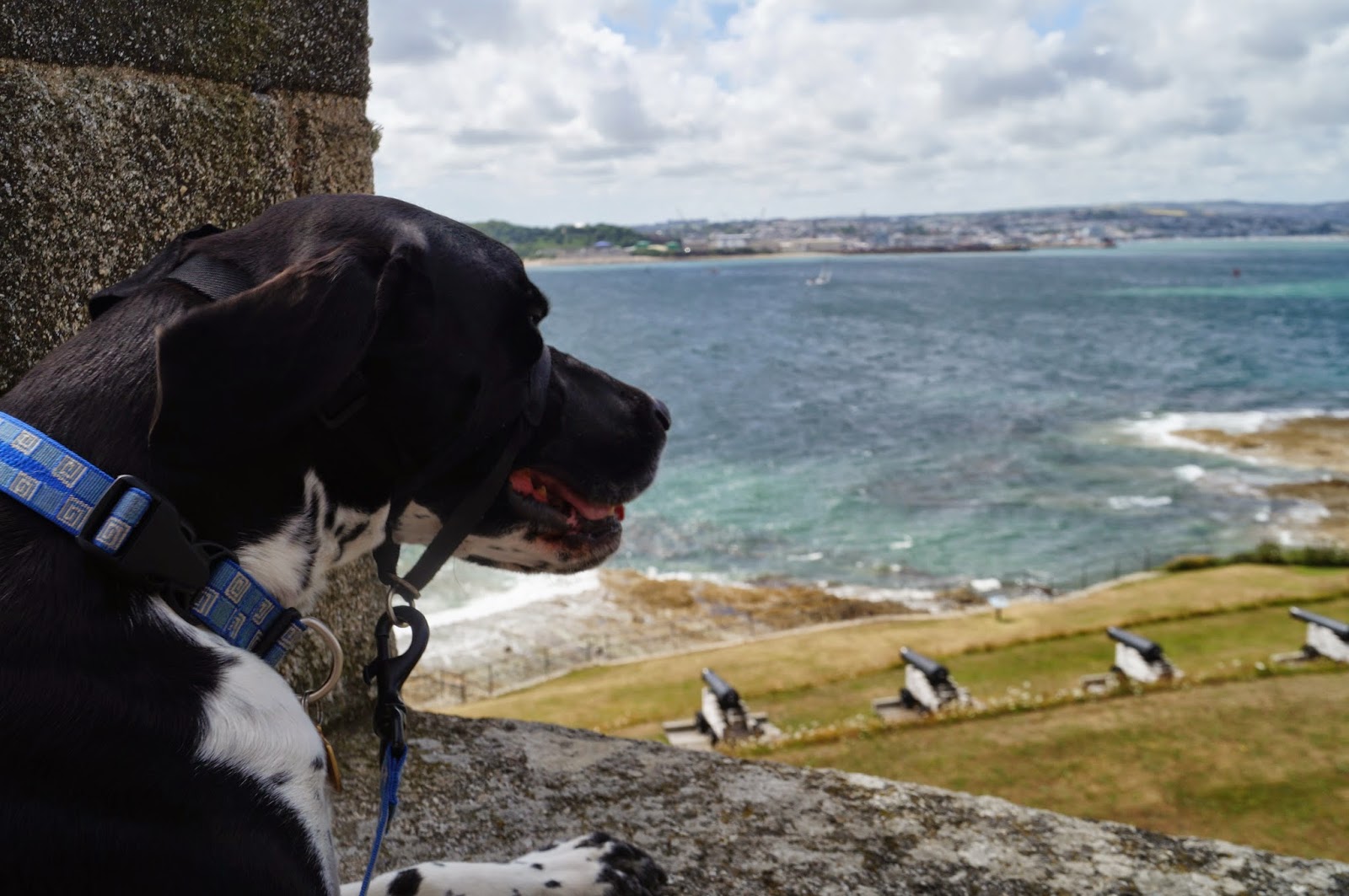 This is a cute shot of my English Pointer looking over the battlements of St. Mawes Castle in Cornwall, taken last summer while we were on holiday.

Have a great day! 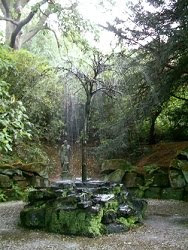